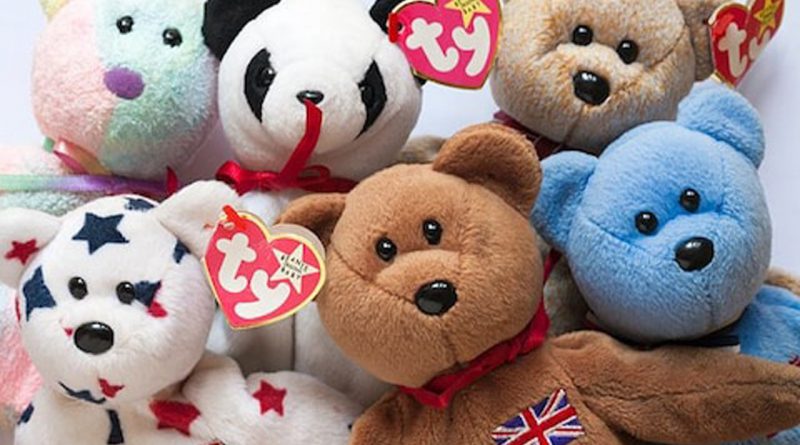 CHICAGO – WSJ – Cameron Percy thought he’d found a rare treasure when he moved into a new place two weeks ago. Someone had left behind dozens of Beanie Babies in a box in the basement.
The 28-year-old took to eBay , Reddit and Instagram, and concluded the small stuffed animals, a craze from the 1990s, will one day soar in value, like the bitcoins he bought in early January.

“A lot of them are never going to come back, and so they’re definitely going to become valuable,” said Mr. Percy. His online listings include Slowpoke, a sloth, and Teddy, a holiday bear.

Two decades after the great Beanie Baby boom, where old and young hit Hallmark Stores around the country in search of rare examples, the speculators are back, living in an alternate Beanie reality.

Some on eBay insist that their rare Beanies, with mistakes in the tags, from a specific generation or with PVC beads as their fillings instead of the more common polyethylene, are worth tens of thousands of dollars.

Such dreams are crushed for anyone calling Rogue Toys, a collectibles store with branches in Las Vegas and Portland, Ore. The store’s answering machine specifically says the store doesn’t want to buy your Beanies.

“If you bring Beanies to me and try to sell them to me in bulk, I’ll give you about 20 cents. That’s me telling you I don’t want them,” said Steve Johnston, the store’s owner. “Give them away.”

Many hoped that the 20th anniversary of Princess Diana’s death last summer would inspire interest in her memorial bear. Others have seen viral news stories touting the return of the market. Some, mostly retirees looking to downsize, thought that now the time might finally be ripe.

Mr. Percy has managed to sell only one Beanie after posting 11 listings.
“It is not like they are selling fast,” he said.

“There’s just this cycle of fake news about Beanie Babies, some of them are the same article, copied and pasted, but they get a ton of traffic,” said Mr. Tedards, who fields about a hundred questions a week from people asking what their Beanies are worth. “It is always a bit of a battle. I have to explain to them that what they read or saw is not true.”

These flurry of posts have confused some collectors, filling them with hope and then letting them down.

Among the disappointed is Lynn Bowman, who started collecting Beanies in 1994 with her then 6-year-old son. She would travel across Illinois and eat McDonald’s burgers to collect the “Teenie Beanies,” toys that could only be purchased with a meal, in the hopes that they would one day be worth thousands.

Now, her old hobby has turned into a bit of a nightmare. No one wants them, not even the five bears she packaged with (fresh) candy that she tried to sell for just $20 in time for Valentine’s Day.

“I kept them really well, and now I find they aren’t worth very much,” she said, having spent recent weeks researching and sorting the Beanies, kept pristine in three tubs in her attic. “I’ll probably end up selling them for cheap—it is really sad.”
Gary Larson, a 65-year-old retiree, remembers the “casual excitement” he felt seeing articles claiming a Mystic, a white unicorn, or a Clubbie, made to commemorate the Beanie Baby club, could be worth thousands.

“But then I’d take out my box of Beanies and realize they were just the normal, ordinary ones, not the ones people were saying are rare,” he said. He is having difficulty selling any of his roughly 200 Beanies for even $2 each, and has given some away.

It wasn’t supposed to be this way. A 1997 price guide, self-published by a New Jersey father, predicted some Beanies, made by Chicago-based toy company Ty Inc., would appreciate 8,000% within the following decade.

The prediction didn’t even hold up for a year. A 1998 Wall Street Journal article found that the “American Trio” of Beanies—Lefty the donkey, Righty the elephant and Libearty the white bear—had fallen to $899 at one Florida shop from $1,299 earlier that year. Ty didn’t respond to a request for comment.

Today, that same trio would probably be worth about $50, says antiques and rare toys appraiser Bruce Zalkin. He remembers a half-a-million dollar deal he made in the mid-1990s for 28,000 bears, which would be worth “hardly any money today.”

Part of the problem, Mr. Zalkin says, is that Beanies were made to be collected, driving up hype and saturating the market. By contrast, children actually played with tin toys from the 1920s or plastic “Star Wars” toys, making pristine examples rare. Toy appraisers predict Beanies will never make a comeback, since the 1990s children—millennials—aren’t collecting like generations before them.

“Sometimes these things that sound like a great idea just don’t pan out,” said Mr. Larson, who remembers going to a 1997 Chicago Cubs game to get his hands on a commemorative Cubs bear even though he is a die-hard White Sox fan. “I definitely fell for it.”

What Are the Features of an Entertaining House? https://realtytimes.com/consumeradvice/homeownersadvice/item/1043312-what-are-the-features-of-an-entertaining-house